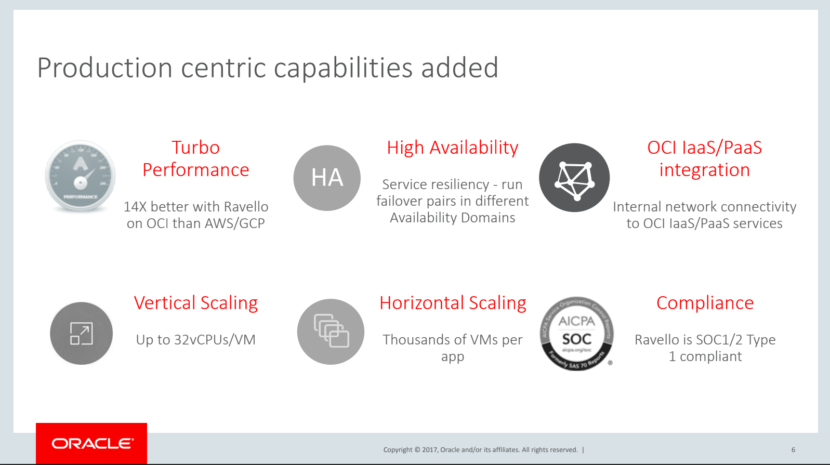 We sit, a group of  about 30, at the Oracle offices on Twin Dolphin Drive just steps away from one of Larry Ellison’s sailboats, surrounded by remnants from the Oracle of yesterday. We’re here to talk about the future of Oracle, though. It’s the second annual Oracle Ravello Blogger Day, with about 40% of folks returning from the previous year. The rest of us new and wondering what to expect.

Because this was the second #RBD2, there wasn’t much time spent by the Oracle team level setting. So let me take the time to do that for you here.

What is Oracle Cloud Infrastructure?

OCI is a public cloud provider, much like AWS, Azure, and Google Cloud Platform, the latter of which was likely purposefully left out of most of the day’s presentations. Oracle actually announced the move to public cloud in 2011 and has had the marketing strategy thus far of targeting it’s current customer base. A very smart move, according to Leo Leung, who joined about a year and a half ago. Moving forward, one of their new strategies will be to tout the incredible advancements they’ve made around performance. Part of this performance magic is through the use of what they call “off box networking,” which is about all they’ll tell you about it. This basically means that they aren’t doing hypervisor based networking (think NSX), it is what’s referred to as “bump in the wire” networking. This is what allows them to offer highly performing networking to multiple workloads, including virtual and bare metal. Bare metal is another reason why they can offer such great performance. They’re also offering SLAs that, in their words, other public cloud providers aren’t offering around performance and manageability, not just uptime.

There will be a concentration on new services in the coming year such as container orchestration, analytics and telemetry, and even serverless. This is mostly playing catch up, as Oracle comes from behind, but there’s a promise to concentrate on performance with each new layer and service brought in to the fold.

Where does Ravello come in?

Ravello has been around for several years, as one of the favorite platforms for vExperts to lab up their VMware configurations to either practice for tests or test things they may want to do in production. In February 2016 Oracle announced their acquisition of Ravello. Another smart move, as offering public cloud is one thing, but helping get your customers’ applications to live there is quite another. You might think of Ravello as one big hypervisor (called HVX). This hypervisor doesn’t require that you use ESXi on it, though you can, but allows you to port over your VMs, even your entire virtual environment to it. And it doesn’t stop at VMware, they support KVM, Nutanix, and multiple networking and storage devices. That part is important. When Ravello is on top of OCI, like a layer of abstraction, customers can move entire data centers, or more likely production applications, directly to OCI without refactoring the application. So there’s no need for switching to cloud native route/switch devices, cloud native firewalls, cloud native blah blah blah, making it much easier for customers to make the move into public cloud. Customers can move their applications exactly as they are. This, at least up front, is a substantial cost and administrative savings. There may also be a potential cost savings if this move would allow customers to get rid of at least some of their VMware licensing costs.

Customers can move applications exactly as they are…

The above statement is where I get a little stuck. Coined “lift and shift,” and then re-coined “move and improve” by marketing, this makes adoption so much easier. Where does it actually leave customers? In my experience, application dependency mapping is perhaps one of the hardest and most necessary practices for customers to do moving forward. Not only does knowing what an application looks like help to make it so much more secure, it also makes monitoring and troubleshooting much more efficient. It could even lead to better application performance. If we’re able to just port current applications to the cloud, there’s no motivation to understand what our applications look like and therefore anything that was wrong with them on-premises, will still be wrong in the public cloud. Is this Oracle’s problem? Maybe not, but as Oracle starts offering more services around analytics and telemetry and touting advanced security, this could become the next challenge. The question is, would you rather pay now or later as a customer? There are certainly both business and technical arguments for both sides. I do think it’s important to understand that eventually customers will pay the public cloud cost by having to go through the exercise of ADM and by moving to more cloud native devices eventually, if they plan to stay in the public cloud.

As I said on Twitter: “It would be sweet if @RavelloSystems would offer application dependency mapping!”

Ravello is not only a migration tool, it should help with manageability once in the public cloud, which doesn’t have to be OCI, by the way. Beyond that, they are offering a new Ravello Training Platform, with the target audience being teachers and instructors. It will allow them to spin up VMs/labs for students to use and offers an “over the shoulder look” for instructors to help students. While not an entirely new concept, they had a customer from Informatica in to tell us that they’ve had an almost 70% ROI and their instructors are saving hours in spinning up labs as compared to the previous solutions they were using.

While Oracle isn’t the shiniest new company on the block, and takes more hits than probably most legacy companies, this could be a really great victory story if they’re able to pull it off. I like that they’re not only resting on the laurels of going after their current customer base, but really trying to make the best performing public cloud. Ravello will always have a use, but without a bit of a pivot, I’m not sure I see the public cloud use case beyond migration. I’ve seen many tools like Ravello that are geared more towards the developer side of the house. Ravello seems to skew towards the operations side, which admittedly is a side I’m more comfortable with, but I’m not sure is the correct side at this moment in history, for moving apps in this multi-cloud world. If you are a developer, though, both OCI and Ravello offer rich APIs that are documented really well (due to an acquisition called APIARY) and integrates well with multiple CICD tools.

Oracle, via TechReckoning, paid for my travel and accomodations for the two days spent in Redwood City attending this event. I currently work for Cisco, and while not really a competitor in this space, another big vendor so might be worth mentioning.

Big thank you to John and Kat Troyer and Amy White for the invitation and the organization! Thanks to Oracle and Ravello for being so honest and open, very refreshing!